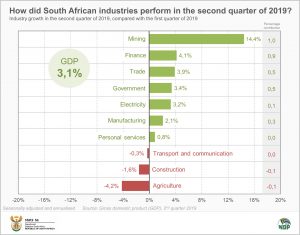 The Research & Innovation unit of the NWDC released its Economic Data Report for the second quarter of 2019.20 which ended on 30 September 2019.

The purpose of this report is to supply an overview of the economic data and information gathered and analysed from a global, African, South African and North West provincial perspective. The report ensures that recent, relevant and reliable economic data supports NWDC and its stakeholders in their decisions and activities.

One of the highlights of the report include the GDP figures released by StatsSA for the second quarter of 2019.20. (Refer to graph image)

Key facts from the GDP release for the second quarter of 2019:

Download the full report from the Economic Data Reports Section