NWDC and its project partners proudly announced the winners of the first-ever North West Innovation Competition that was held across the province during the latter half of 2016.

Khupari Mpona (Debrak), Morebodi Kaotsane (Taung) and Prince Nkoe (Mogwase) were crowned as the top three innovative minds in the province during the awards function held at Cookes Lake in Mahikeng on Wednesday, 8 February 2017.

The NWDC, in collaboration with the North-West University (NWU), the Technology Innovation Agency (TIA) of the Department of Science and Technology, the Office of the Premier and the North West Department of Economy and Enterprise Development (EED) formulated and conducted the province’s first Innovation Competition during 2016.

The main objective of the Innovation Competition was to raise awareness in communities that they can make a difference to their lives, and those of others, by being innovative.

The identified target audience to participate in the competition was any Bokone Bophirima citizen from the age of 16 with an innovative idea that could benefit their community. Aligned to the pronouncement of the Premier of Bokone Bophirima, Mr Supra Mahumapelo, the competition encouraged ideas from the focus areas of agriculture, culture and tourism which had the potential to address the challenges in VTSDs and ensure the optimal use of natural resources.

After being publicised in provincial print media, on-line, through social media and via posters and pamphlets distributed at municipal level thanks to the LED offices, the competition was run in two phases. A total of 1 061 SMS entries from across the province were received, and after a rigorous selection and evaluation process, the project partners shortlisted twenty ideas. Following interviews and further engagements, a panel identified the top three finalists and prize winners.

Apart from the honour of being selected as one of the top three most innovative minds in the province, the three prize winners will receive support from the project partners towards developing their idea into a concrete product or service to the value of R100 000, R50 000 and R25 000 respectively.

First place winner Khupari Mpona from Debrak designed a truly innovative water-wise nursery for growing crops that could benefit a community at large, while second place winner, Morebodi Kaotsane from Taung proposed the brilliant idea of marking cows and donkeys found next to roads with a reflective substance that would make them visible at night, improving road and animal safety. Third place winner, Prince Nkoe from Mogwase, suggested the development of a Digital Risk Assessment tool for the mining industry that shall function as an open source peer to peer safety network.

Said NWDC’s Acting CEO, Mike Mthimunye: “The NWDC is proud and humbled to have been entrusted to lead the province’s first- ever Innovation Competition. Together with our valued project partners, we thank all 1 061 bright minds for participating in the competition by sending us their ideas. NWDC and its project partners look forward to bringing you updates on the development of the top three ideas into commercialised ventures, making a tangible difference in people’s lives.” 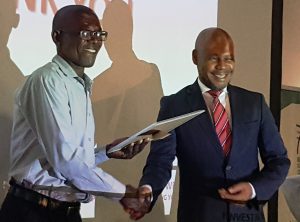